Well apparently it didn't remain a quiet night for some but especially those sleeping in the front of the roadhouse. Deb and Martin reported a Brahman chewing on their tent straps and our next door neighbor (in the caravan and friends of Collis' cousin) found a large cow pat deposited freshly in front of his van this morning. Deb also said she heard horses roaming through the camp as well but I'm not sure who else heard or saw these but then we found a few brumbies just down the road when we left camp later- so I believe you now Deb. I certainly heard the dogs in the early hours of the morning but I missed out on the rest of the excitement.
Not a good start this morning with, firstly Melanie requesting a day off the saddle due to a lingering headache (?heat stroke). Then Fliss arrives with her derailleur in tatters after a slight mishap in the sandy soil. 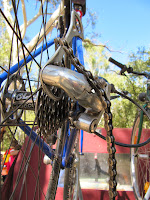 So it was decided Fliss could ride Mel's bike and we would carry hers on the trailer until John could have a look at it tonight. I thought this would put us way behind in time but we ended up early for the morning tea break. Once Melanie got herself organised, she was pretty good at getting Collis moving. 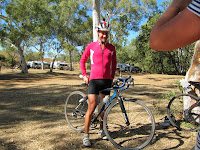 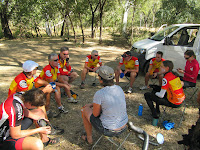 Morning tea was at a rest area that was beside the Spring Creek and was just superb. Lots of shade and nice facilities. It would be a great place to free camp on another occasion. Ben decided to dress up as princess as he decided to ride her bike and lend his bike to Fliss.
Lunch was at Little Panton River rest area and this was quite a nice spot as well and another spot that would be great to free camp at. The group ended up very spread out today with most not stopping for afternoon tea but riding straight on after lunch into Halls Creek. Peter J, Mark, Deb & Martin stopped for a quick drink before heading in. I think Mel found the whole experience of staying in the car was very boring and a very long day (sorry Mel but our days can be alot of waiting around).
Staying at Halls Creek caravan park with the barbed wire around the perimeter. Not the most inviting looking park we have stayed in but we have green grass, some power and background music (coming from a live band somewhere in town). What more could we ask for? Lots of warnings around the park about theft so most things have been locked up securely and we just have to hope for the best.
Posted by cycle across oz at 5:57 AM