Most of us had a good sleep last night and the camp was pretty quiet. One little group of riders were singing away as they packed up their tents- zippity do da. No great rush this morning as Collis did organize morning tea for 10 am. 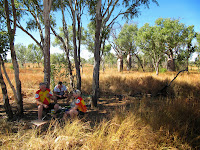 Quite a number of the riders ended up with punctures from riding their bikes down to the river yesterday as there were large amount of 3/4 jacks in the grass. Most punctures were discovered last night but Martin discovered his just as he was about to leave this morning. Deb waited very patiently while he changed it. Not far down the road Woody had his 18th puncture for the trip. This would have to be a record for Cycle Across Oz. The rest of the group rode out without a problem and went to Doon Doon Roadhouse for breakfast or a cuppa or to just use the toilet. John stayed behind to help us load the car (I think he thinks it's not proper for me to be lugging these heavy bags- he doesn't realize some of the heavy loads I've lifted in my working life) but it is very thoughtful and kind of him and very much appreciated. The packing has become so much better organized and even though we have 18 riders we seem to fit everything in with room to spare. The car is still moaning under the load but there is room for a few lighter objects. 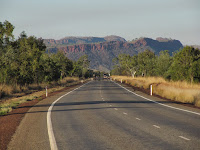 Poor John didn't realize everyone was going to Doon Doon so he sped off last and was wondering why he wasn't passing anyone or even seeing anyone on the road. He stopped at morning tea area but thought we wouldn't be there until 10 am so he decided to get back on and keep going. Unfortunately for him we arrived 5 minutes after he had left. So John ended up riding straight to Warnum unsupported today. 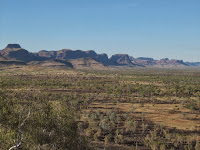 The scenery is still stunning (says Annie) but the wind did keep changing today. Some tailwinds but also some side winds today although the wind did not start until later in the day. Temperature was again in the low 30's and the riders got in early enough that they weren't affected by the heat. Nice pool at Turkey Creek but again the water was pretty cold. This was refreshing especially after the bush camp as the one thing you really crave is a dip in the water.
Leftover chicken curry was enjoyed by Mark, Peter, Annie and Collis. I had a little bit then Annie bought me an ice cream. We went to bed so early tonight with Collis asleep by 7.30pm. Not much noise around the campsite so I think most people have gone off to bed early as well. Annie was going to buy us some chocolate but I haven't heard her come back so looks like I may miss out tonight (I'm talking about chocolate).
Posted by cycle across oz at 1:51 AM