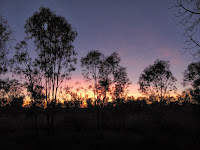 Late start this morning or I should say late start for Collis and I as we slept in till 6 am. Most of the riders were up already and most had even finished their breakfasts. Joan left camp not long after we rose at around 6.30 am. We have 2 more sleeps before we get into Broome. Tonight I am providing the meal so there is only one meal the riders have to get for themselves, if any, as most of them buy from the roadhouses.
The riding today was pretty good with mostly tail or side winds (or so I'm told). The road surface is good but the scenery wasn't anything to write home about. 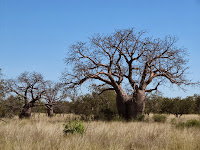 The boab trees have come back today after an absence over the last couple of days. They are bigger than ever also- huge mothers. We had morning tea and lunch on the side of the road today with some trouble finding shade but we parked ourselves under a boab tree at lunch time and we have noticed the trees have leaves on them now as well. This tree was unusual in the bark on the tree but definitely had the fruit of a boab. 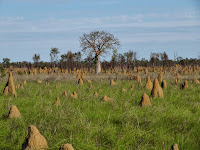 Roger volunteered to lead the pack to find a nice area for camping tonight. We were looking at the 130 km mark but he came across an area that had a road along a fence line into a property with a nice cleared area for the campfire and tents. This was at the 123 km mark. The sign was put out straight away to lead everyone in. We thought everyone was in so Joan brought in the sign from the road and we started to prepare the fire and dinner when I realized I hadn't seen Peter J yet. Sure enough he hadn't come in but it was only 3.30 pm with plenty of light left so no need to worry. The sign was quickly put back out but if he had gone past it was too late. We were quite visible from the road so he should see us. I asked Collis to start searching for him when there was still no sign at 4.30 as we only had another hour of light left. Mark went off on his bike and Collis started flagging motorists down. A bus load of aborigine kids said they had seen him about 10 or so kms ahead of us heading towards a boab tree. Mark was riding ahead to see if he could locate him. There were so many stories going around camp by this time with him being bitten by a big brown snake to him being stuck up a boab tree. He and Mark came in just on sunset and Peter was a bit embarrassed that he had caused so much drama. He had sailed straight past the sign, Joan riding down the track into camp and seeing us from the road. Peter ended up doing an extra 40 or 50 kms today.
We had spaghetti bolognese for dinner which I had cooked last night at Fitzroy Crossing and froze up. I also did a vegetarian version for Joan and luckily I did as we just had enough with no leftovers tonight. I then made a gluten free peach cake for dessert and we had long life cream that was NOT curdled this time. All went down well and was finished off with chocolate handed around for the late stayers. 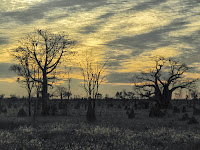 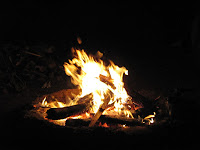 Everyone sat around the fire for quite awhile tonight and we went around the group to hear everyone's highlights. Everyone agreed the scenery has been spectacular but the friendship and group dynamics also featured in the highlights. It has been a great trip. Shame we only have 2 more nights before Broome. Woody even said he was enjoying this bush camp and that is a biggy for Woody who hates camping out at the best of times.