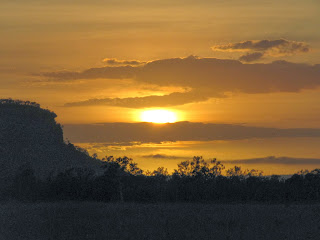 We missed out on talking to the aboriginal kids except for an informal chat in the campsite. They were exceptionally well behaved kids and after listening to the instructions by the teachers when getting them ready in the morning, I thought I should use the same tactics for the riders. The kids were particularly taken with Fliss and she was late getting out of camp because of their attention.
Everyone in great spirits today knowing they survived the longest riding day in the whole trip and have all pulled up feeling pretty good. Some hung around in camp talking with the kids but some just wanted to get under way and on the road. The weather is perfect again although it did warm up before the end of the day. There are alot of clouds around and it looks like it could rain but it is doubtful at this time of year. The Gods have been good again today with tail winds. 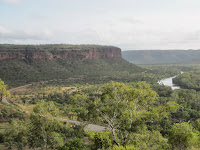 We changed our choice of caravan parks today as we had been trying to contact the Wirib CP for months but the phone would just ring out so we thought it was closed. When we arrived we chatted with the new managers and decided it was a better choice even though they were having troubles with their electricity and we may have to have cold showers. Everyone was in by lunchtime and some went for a swim, some went for a meal and everyone just mostly sat around or did chores. 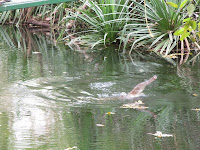 At 5 pm the other caravan park had the feeding of the crocodiles and Woody was chosen to feed some. Collis and a few of the riders went down to the local sporting oval to watch the kids from Pidgeon Hole and hoping to have some photos taken with them but the sports were over before they got there and they had gone back to Timber Creek. Apparently our group of kids won the sports day.
We ate "al la camp food" tonight with a mixture of vegies in 90 second brown rice with tin chicken. Yum yum. Filled the spot anyway. 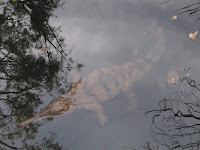 A couple of us decided to check for crocs in the river near our tents. We saw 3 sets of eyes swimming close to the shore which appeared to be tiny fresh water crocs, maybe babies. I called Collis down to have a look and he walked up to the waters edge, when I all of a sudden spot 2 eyes just under the water about 3 feet in front of Collis staring straight at him. He wouldn't believe they were eyes (as they did look a little like rocks) but then they slowly started to move around in the water. I made a couple of visits down to the river after that just to check where he was sitting until eventually he had disappeared and was probably sitting on the bank watching me so I thought best to leave him or her alone. This was a nice spot although the food in town was limited and not the greatest.
Posted by cycle across oz at 9:40 PM